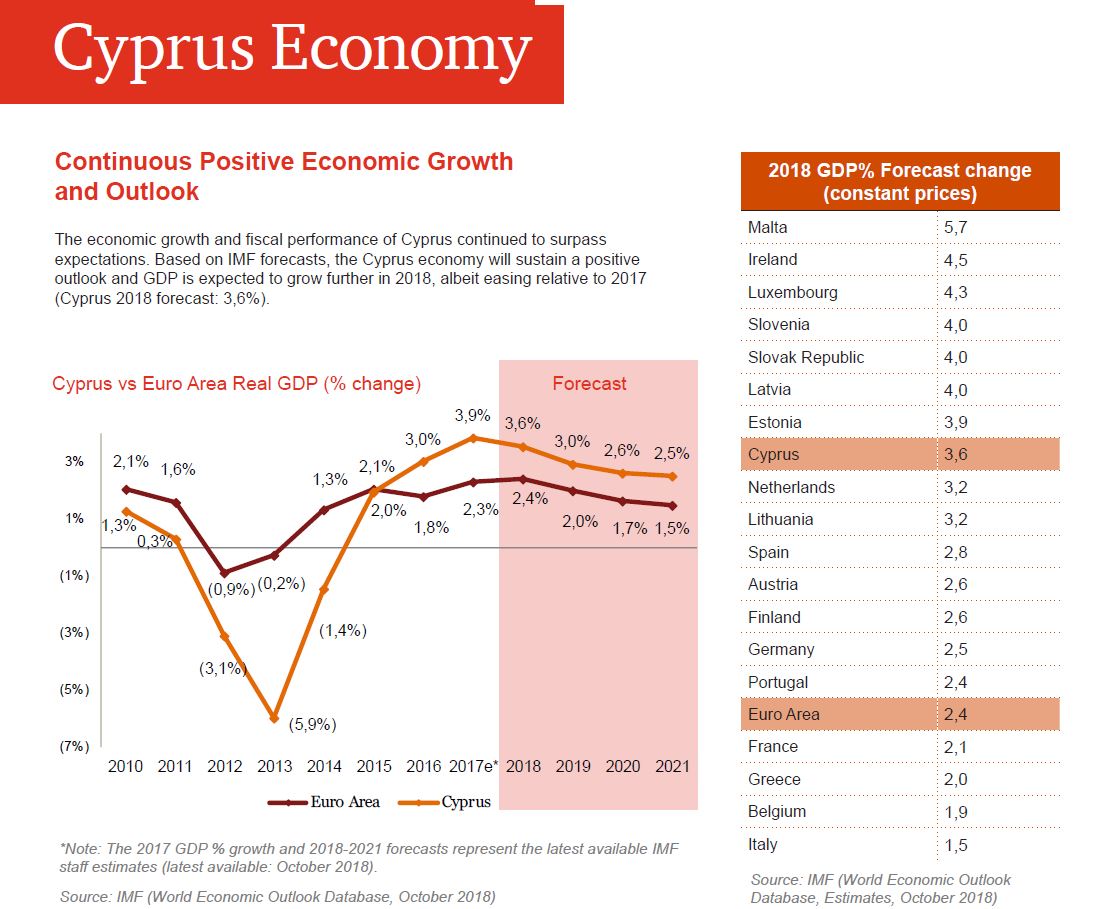 Economic growth and the fiscal performance of Cyprus surpassed expectations during H1 2018, with GDP expected growth of 3,6% for 2018, thus positioning Cyprus among the high accelerating economies of Europe. Cyprus recorded the largest annual unemployment drop in Europe, shrinking to 7,5% – as per Eurostat data in August 2018, and as compared to 10,5% in August 2017, and relative to 8,1% for the Euro Area average. However, unemployment amongst young people is still relatively high according to the European Commission with a further expected decrease driven by a general improvement in the labour market and a series of activation measures.

As of 2018, Cyprus GDP per capita is equivalent to 91 per cent of the EU average, bridging the gap which previously stood at 88 per cent in 2015. Employment is growing across most sectors of the economy, and most substantially in the construction industry, leading to a sharp reduction in the overall unemployment rate. Rapidly expanding employment combined with a low inflation environment, has led to the real disposable income of Cypriot households to increase in 2017 for the first time since 2012. In the same period since 2012, interest rates on housing loans have been declining continuously. By 30 June 2018, interest rates dropped to 2,96% (recording a further 20 bps drop from 2017).

Banks remain very cautious when it comes to granting new mortgage loans, given the sizable proportion of NPLs (40% as at June 2018) and heavy indebtedness of the household credit sector made evident by the overall stock of mortgage loan facilities across Cyprus’ banking sector which has remained stable, as access to credit remains substantially tightened. Total mortgage facilities stood at €12bn in June 2018, compared to €12,4bn in 2017

Cyprus’ macroeconomic projections have been revised favourably during the past few years. This led to a series of credit rating upgrades enabling the country to tap into international capital markets.  Notably, in September 2018, Standard & Poor’s (S&P) upgraded Cyprus’ credit rating to investment grade, after maintaining a sub-par rating for almost seven years. In early Autumn 2018, other key international credit rating agencies upgraded the sovereign’s rating by one notch, while maintaining their positive outlook.

Yields on 10-year Government bonds, previously priced at 3,7% at issue date (December 2015) have fallen to 1,5% by the end of 2017, reflecting the strong financial performance of the country. From that period to date, yields inflated amid uncertainties in the Cypriot banking sector, linked with the developments concerning Cyprus Cooperative Bank Ltd (CCB). After an agreement was reached with Hellenic Bank Public Company Ltd (HB) to acquire certain assets and liabilities of CCB, yields appeared to have fairly recovered, dropping to 2% by the end of June 2018.

The growth in real estate activity levels observed in 2017, continued with a similar pace during the first half of 2018. In addition to the government’s schemes encouraging direct investments in Cyprus, which have been attracting interest from non-EU buyers (Chinese, Russian, Indian and UAE), other factors which contribute to the growth include:

Interest from foreigners and predominantly non-EU buyers continues to be the driving force for the market and is mainly fueled by the continuation of government schemes encouraging further investment in Cyprus. Increased levels of demand from the domestic market and increased supply of new housing stock as a result of the reactivation of the private construction and property development sectors, altogether contributed to the level of growth being observed.

Further growth in all property price indices was recorded during 2018, reflected in the increased demand and activity levels in the real estate sector. The behaviour of residential property prices across Cyprus could be captured by two indices, namely Central Bank of Cyprus (CBC) index and the Royal Institution of Chartered Surveyors Cyprus (RICS) index. Both indices have exhibited a negative trajectory since 2010, portraying the declining trend in demand for residential property, including demand for holiday homes by foreign buyers. This negative trajectory continued until 2015, resulting in an overall drop in residential property prices for the period, and the region of 26% to 33% compared to 2010 values. In 2016, price index movements demonstrated signs of marginal improvement and stabilization. In 2017, for the first time during the 8 years 2010-2017, both price indices behaved positively. Finally, and during H1 2018, the CBC index demonstrated a further 2% growth compared to H1 2017, whereas the RICS Residential index up to Q1 2018 (latest available to date), demonstrated an even higher 5% YoY growth.

In terms of commercial property, the aforementioned price indices followed a steep declining trend during the period 2010 to mid-2016 with prices exhibiting an overall drop of 53% for retail properties and 37% for offices. In 2016, prices showed signs of stabilization up until the first half of the year, and marginal growth in the second half. During 2017, growth in retail and offices continued with the indices reaching their highest points since 2013 and in Q1 2018, prices for offices demonstrated a YoY growth of 12%, primarily reflecting the increasing levels of demand for Grade A office space. On the other hand, general retail properties recorded a modest YoY growth of 2%, indicating to the challenges and opportunities for the sector.

In an environment of increasing demand for property acquisitions, the supply side appears to be in an accelerating mode, as evident by building permits which continue to grow both in volume and also in size. Transaction volume saw a 24% increase in sale contracts across Cyprus, and the majority of transactions recorded remained in Limassol, representing 37% of the total transaction volume.  In terms of Foreign transaction activity, Limassol and Paphos appear to be the preferred districts for foreign buyers and thus constituted 70% of foreign transactions, where the lion’s share of the foreign buyer demographic referred to acquisitions by non-EU buyers.  The value of new building permits issued during the first half of 2018 increased by a notable 20%, as compared to H1 in 2017 and Nicosia continues to be the district with the highest concentration of new developments licensed, leading by 39%, and followed by Limassol with 29%.

High-end residential developments (property above 1,5 million EUR) saw an increase around the 8% mark in sale contracts compared to 2017, and Limassol attracted 63% of the property segment. Since 2014, and following on the revisions to the scheme for naturalisation of investors in Cyprus, demand for this type of properties has been increasing continuously. As per Land Registry data, during H1 2018, 80% of high-end residential property transactions in Limassol related to apartments, with the remainder 20% relating to villas. In regards to Paphos, almost entirely high-end residential transactions recorded in H1 2018 related to villas.

Economic growth and the fiscal performance of Cyprus surpassed expectations...

The real estate market has welcomed 2018 with...

The Real Estate and Construction sector, constitutes one of the main pillars...

The Statistical Service has announced that the number of building permits...